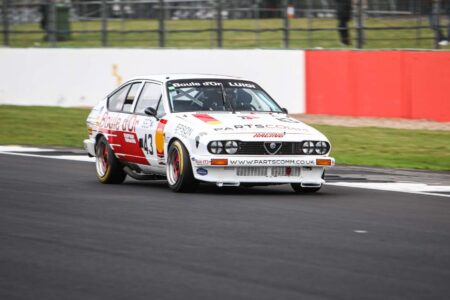 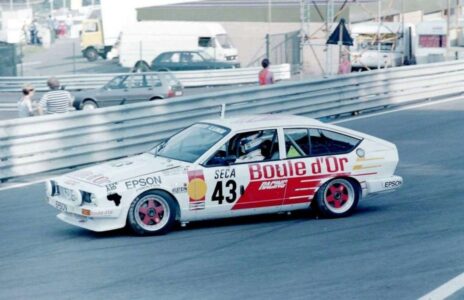 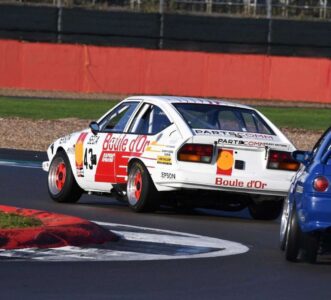 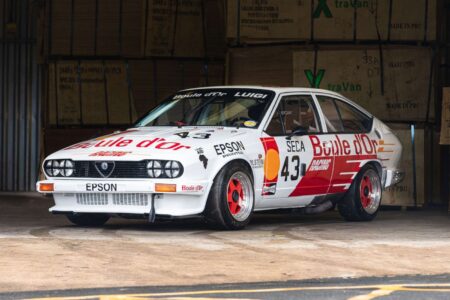 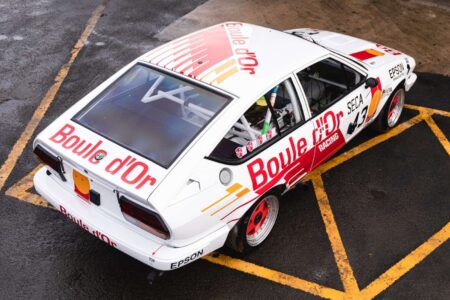 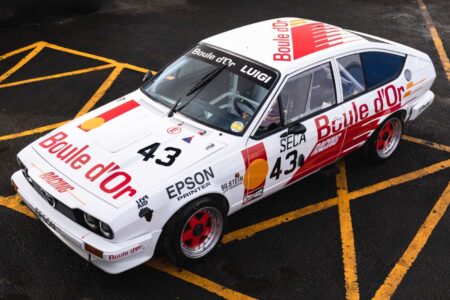 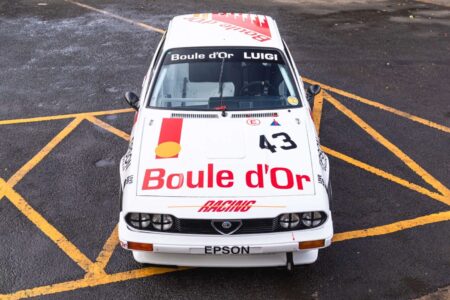 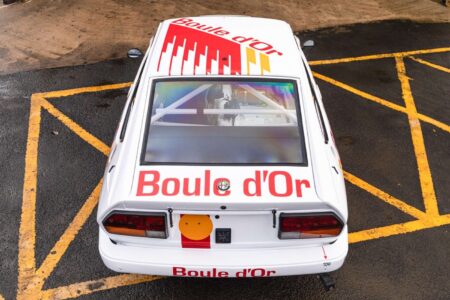 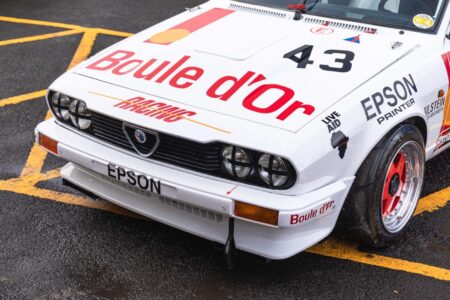 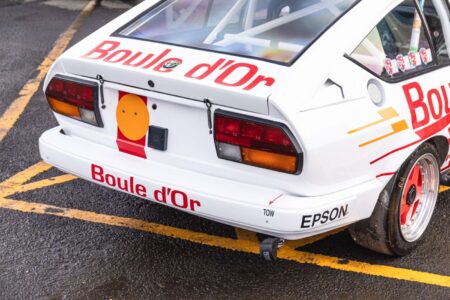 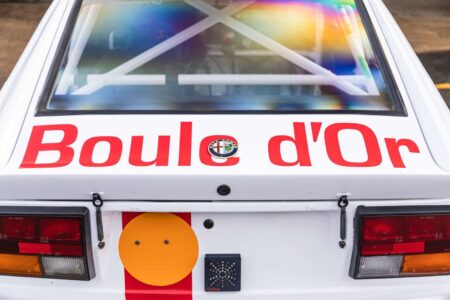 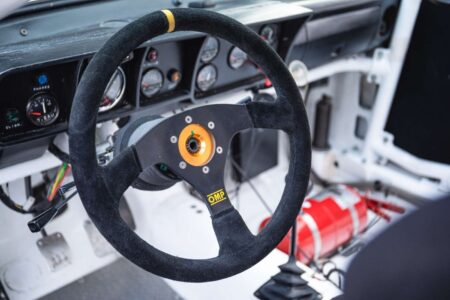 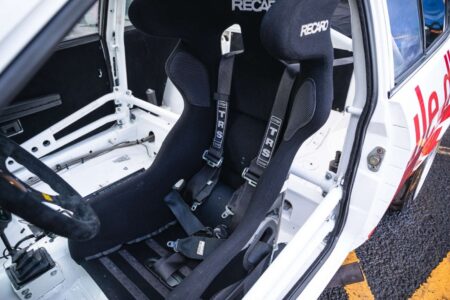 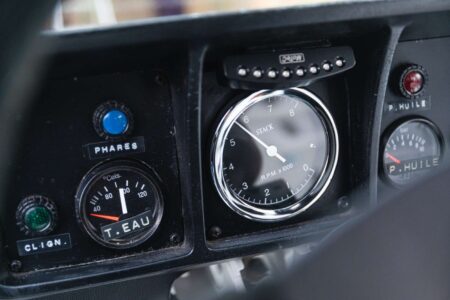 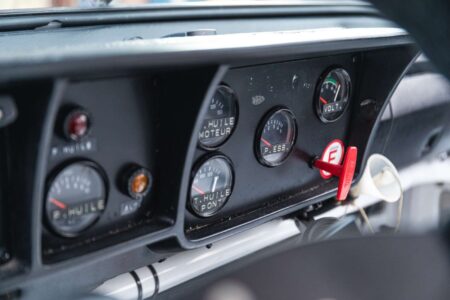 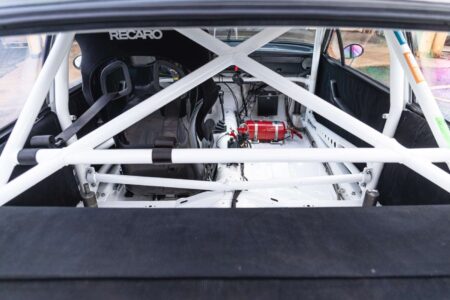 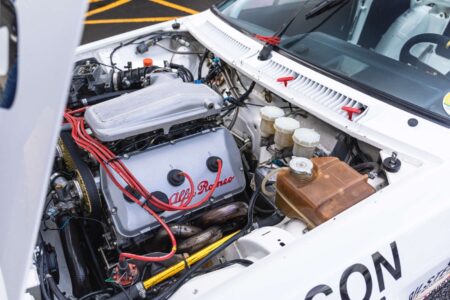 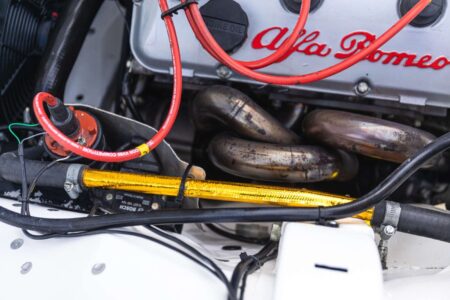 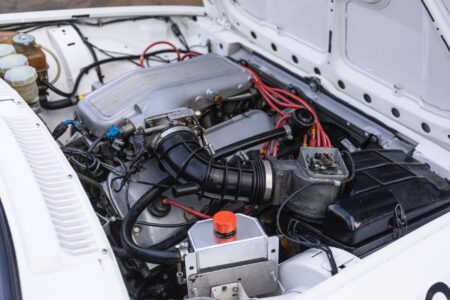 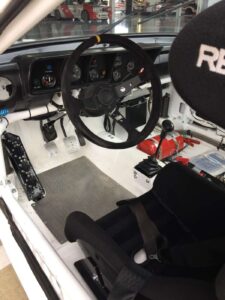 In 1981, Alfa decided to join the join the growing number of National and International Touring Car Championship with its all-new V6 engine in the old Alfetta GTV. Alfa’s racing department, Auto Delta, contracted the tuning firms, Imberti from Italy and Luigi Racing from Belgium, and both companies worked on designing and creating the special parts that would allow the cars to conform to the current ‘Group A’ regulations. Auto Delta took care of the homologation process, photography and paperwork.

At the start of the 1982, both tuners prepared 6 cars in total for Division 2 (cars up to 2500cc) and they were successful from the start with Luigi Racing claiming the title three years in a row (’82-84) with their yellow GTV6 and Imberti taking the spoils in 1985 in their distinctively liveried Jolly Club-sponsored car. During this four-year period, there were times when the Alfas were so dominant that they were even stronger than the considerably faster Division 1 cars from BMW (635csi), Jaguar (XJ-S), Volvo (240 Turbo) and Rover (SD1).

Luigi Racing used a numbering system for their cars indicated by a plate in the engine bay, stamped LR****, where the first two numbers indicated the year of build i.e. 82=1982 and the second two indicating the build number of the car in the total series i.e. 18= 18th Group A GTV6 built. We are informed there were no more than 20 or so Group A cars built from ’82-85 with some significant cars that can be identified, including LR8205 as Andy Rouse’s BTCC 1983 championship-winning car, LR8410 became Colin Bonds Australian Touring car in ’85 and LR8512 being Ron Simmonds famous car in the late 90s having competed in the ETCC in ’84 and ’85 and then being used by Ron in the Alfa Challenge functioning partly as a test mule for Ron’s Alfa handling kits.

This car has always been Identified as the ’85 Spa car No 43 Driven by: Bernard de Dryver (B)/François-Xavier Boucher (B)/Loudwig Boucher (B) due to the rear-view mirror location, single central wiper and the air-jack input position on the rear. Previous owners had no reason to doubt this and also the logical conclusion was that this was François-Xavier Boucher’s car for the whole ’85 season.

The car’s current owner had been trying to find a GTV6 to race in Historic Touring Cars and had been in discussions with Alfa guru, Chris Snowdon. Chris had known about LR8513 for years and called Mr Vertonger (who was an Alfa racing mechanic back in the day and had a collection of Alfas – the Luigi car being the hidden gem) to broker a deal. Chris drove his empty trailer to Belgium in 2016 to pick up a very dejected looking Alfa along with a plethora of original, but still brand new, Alfa Romeo parts and panels, which were all used to painstakingly rebuild the Alfa over a two year period, thereby preserving LR8513 for the next chapters of its life.

The car was built to compete in Motor Racing Legends Historic Touring Car series and run by Chris Snowdon Racing where it has enjoyed many class victories and performed with great reliability. LR8513 is a ‘Group A’ car and runs the wonderfully sonorous 2.5-litre V6 which is reported to produce over 250bhp and is, of course, fitted with the original, and recently refurbished, Ciccotti gearbox. Supplied with current FIA papers (GB11358), valid until 31st December 2027, this special car offers a gateway into some of Europe’s best historic motorsport and is a significant part of Alfa Romeo Touring Car history.